Duffy Jennings’ riveting coverage of the Moscone-Milk murders and the Dan White trial was an arduous reporting job and daily journalism at its finest. His account of a reporter’s life makes for vivid reading.

Duffy Jennings’ memoir of the turbulent ’60s and ’70s in the Bay Area is incisive and compelling. There is a “Forrest Gump” feel to how he was at the center of so many major events. Anyone who has experienced the horrors of addiction will find his experiences with the effect of alcohol to be enlightening. Jennings’ recollections of his mother’s gay bar in San Francisco are priceless.”

Duffy Jennings wrote more than 500 stories for the San Francisco Chronicle, but he may have saved the best one — his own — for last. Written with admirable skill and moral clarity, his memoir reveals what it was like to cover a city gripped by the Zodiac and Zebra killings, Jonestown, the Moscone-Milk assassinations, and the Dan White trial. But this isn’t only a sharp, vivid snapshot of a city in crisis. It’s also a family saga that defies stereotypes at every turn.

—Peter Richardson, San Francisco State University lecturer and author of A Bomb in Every Issue: How the Short, Unruly Life of Ramparts Magazine Changed America

Duffy Jennings brings the reader inside the San Francisco Chronicle newsroom directly to his reporter’s typewriter to present valuable insights into events during the most turbulent, chaotic decade in San Francisco’s modern history. He adds a very gutsy human dimension with intense and painful personal revelations even as he was writing the stories that mesmerized us during his prolific career.

An unvarnished look at San Francisco in the 1970s

In this insightful retrospective, Jennings’ writing today is as fresh, compact and compelling as it was during his time as the Chron’s go-to front-page scribe. Jennings tells his story with an unflinching eye buoyed by raw honesty and introspection. This nexus of fascinating biography and authentic journalism makes for a page-turning read that will not only move you, but will have you wishing for more when it ends.
R.K.

Duffy Jennings gives us an unsparing look at what it was like covering this crap show for the Chronicle while trying to maintain his mental balance as his coldly brilliant mother was slowly drinking herself to death with regular flourishes of suicide threats and genuine attempts.
J.J.C.

For me, a Northern California Boomer who grew up in the 60s & 70s, Jennings nailed what it felt like to live through those crazy times. I can’t recommend this book enough!
R.G.S. 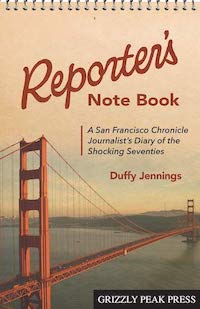 It is the book all journalists wish they could have written, but we don’t have Duffy Jennings’ talent. Pulitzer Prize for journalism. Why the heck not?
J.Y.

It’s a triumph as a memoir and a brilliant account of his time at The San Francisco Chronicle back in the paper’s heyday in the roaring 1970s.
K.L.

Duffy Jennings stands out as a gifted reporter who made the most of his unique perspective, skill, access, craftsmanship, and opportunities. His accounts are as vivid today as they were when he wrote them in the 70s, with the added bonus of today’s context. A terrific read.
D.H.

Seeing the big stories of the decade through the eyes of someone who was in the middle of it all is a rare opportunity.
M.S.

It’s a compelling read that kept me up late for a couple of nights because I couldn’t put it down, and it has a heart-warming ending that left me smiling.
P.G.Z.

Duffy Jennings talks about the ’70s, The Chronicle and more in new book