The Dan White verdict and the fury that followed

It was one of the most heinous crimes in San Francisco history. The sentence: seven years, eight months.

The Chronicle’s front page from May 22, 1979, covers the verdict in the trial of Dan White, the former supervisor who shot dead two of the city’s top officials.

“White was convicted by a jury of two counts of voluntary manslaughter yesterday for the killings of San Francisco Mayor George Moscone and Supervisor Harvey Milk in City Hall last November 27,” read the story by Duffy Jennings on The Chronicle’s front page.

White faced a possible death sentence if convicted of first-degree murder, but the jury was swayed, in part, by the infamous “Twinkie defense.” Attorneys argued that White couldn’t have planned the killings because his depression diminished his mental capacity. As evidence, a psychiatrist pointed to White’s shift from healthy eating to a junk food habit that included Twinkies as a symptom of depression.

No defense attorney could have convinced City Hall or San Francisco’s gay community that White wasn’t a murderer.

“In a long night of looting, burning and chants for vengeance, more than five thousand demonstrators, many of them gay, rampaged through Civic Center and nearby neighborhoods last night in violent protest of the manslaughter verdict against Dan White,” the story by Katy Butler near the bottom of the page read. “It began as a quiet march of shocked and grieved gays from Castro and Market Street at about 7 p.m. But the mood quickly became disorganized and chaotic as demonstrators arrived at City Hall and night fell.”

Inside City Hall earlier in the day, shock and disgust reigned.

“Mayor Dianne Feinstein, her eyes glistening with tears, reacted to the verdict with ‘disbelief,’” the story by Marshall Kilduff and Eugene Robinson read.

“As far as I’m concerned, these were two murders,” Feinstein told reporters. “This raises the question of who gets what kind of penalty and why.” 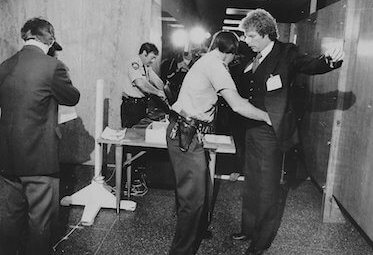